Baby’s Babbles: What is Babbling and When Will It Start?

By the time baby is 4-6 months, it might seem like they have a lot to say—but you can’t understand any of it! The sound baby makes before they say their first words is known as babbling.

Babbling may sound like nonsense, but it’s an important part of baby’s communication development. Read more to get answers to all your babbling questions! 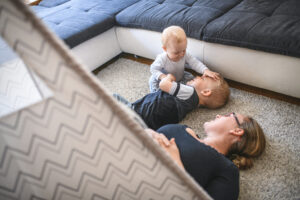 Babbling is a stage of early language development when baby makes consonant-vowel or vowel-consonant sounds, such as “ma”, “da” or “um”. Repetitive babbling occurs next (for example, “mamama”). Finally, baby will combine a variety of sounds (i.e. “mabaga”) which is called variegated babbling. When baby babbles, they’re getting used to using their mouth, making sounds, and learning communication patterns, so they can begin talking!

When do babies start babbling?

Every baby is different, so there is some variation of when babbling will start. Babbling is expected to emerge around 4-6 months.

Is babbling a milestone?

Yes, early babbling is a 4-6 month milestone. By this age, baby should use consonant-vowel sounds in babbling, like “da, da, da.” They may also use babbling to get your attention at this age.

Early on, baby’s babbles will be consonant-vowel sounds. They may sound like “ba” or “da.” But not every babbling baby sounds the same; baby’s babbling may actually differ depending upon the language(s) they are exposed to!

As baby gets better at babbling, they will make longer strings of sounds. These strings may sound like “up-up-up” or “mi-mi-mi.” It sometimes sounds like actual words (such as “ma-ma”), but other times sounds like nonsense words.

Do baby’s babbles mean anything?

As baby babbles more, they will begin to imitate the sounds they hear around them—which means they are trying to say words! If you hear them make a recognizable consonant sound, try finishing the word for them. For example, if they point to the dog and say “do”, respond “yes! That’s the dog!”

They may also start using gestures like pointing to show you what they want. Baby understands many of the words you say, even if they can’t say them yet. So be sure to keep communicating with them throughout the day!

Do cries or squeals count as babbles?

Crying, cooing and other sounds like squealing are not babbling, but they are methods of communication that baby uses before they can talk. Cries and coos are most frequently heard in the 0-3 month period.

What if baby is not babbling?

If baby is not beginning to babble by about 7 months, talk with a healthcare provider. They may recommend working with a speech-language pathologist to help baby communicate.

Related Articles
How Your Child Can Benefit From Having a Pet
Is Baby Not Meeting Their Milestones? What To Do Next
Encourage Your Baby to Talk By Narrating Your Day

Do Twins Reach Developmental Milestones At The Same Time?